The Joy of the Bride

"And Jacob vowed a vow, saying, If God will be with me,
and will keep me in this way that I go,
and will give me bread to eat, and raiment to put on,
so that I come again to my father's house in peace;
then shall the Lord be my God ...”
Genesis 28: 20-21

They knew that at the end of their life’s journey they would be at home with Him at last.

Jacob's prayer was a me first, then God type of prayer, and went a bit like this: “If God gives me the desires of my heart, then I will delight in Him.”

“Delight thyself also in the Lord; and he shall give thee the desires of thine heart.
Commit thy way unto the Lord; trust also in him; and he shall bring it to pass.”
Psalm 37: 4-5

David's exhortation was for God to be the centre of the life from which all else would revolve. His words would have conveyed this thought: “If every thought of my heart delights in God, then all His desires will be mine also, and granted in abundance.”

God had a special purpose for Jacob and He was going to take care of him, but Jacob had many things he had to learn about his God and about himself! He had to learn that his God must come first and his soul must delight in Him and not in himself. God allowed certain circumstances in his life to temper Jacob into God's way of thinking, and it took many years and much suffering not only for Jacob but for others as well before he finally arrived at that point.

One night there wrestled with him a Man from God until Jacob was humbled. He could no longer stand with confidence on his own and he had to reveal his supplanting character by confessing his name before God would truly bless him. And God did bless him. He changed his name from Jacob to Israel. He restored him in peace to his brother even as he had asked of God years before, and despite of his wondering and wilfulness he had been cared for and provided for.

But oh, how different the life and testimony of Jacob would have been the Lord God had been his soul's delight earlier on – much earlier on! So much time had been wasted. Strife, vain glory and unnecessary suffering had been his portion and that of his family for years.

Oh that the Lord Jesus may be the joy and delight of our hearts, and that we may in spirit echo the words of John the Baptist: 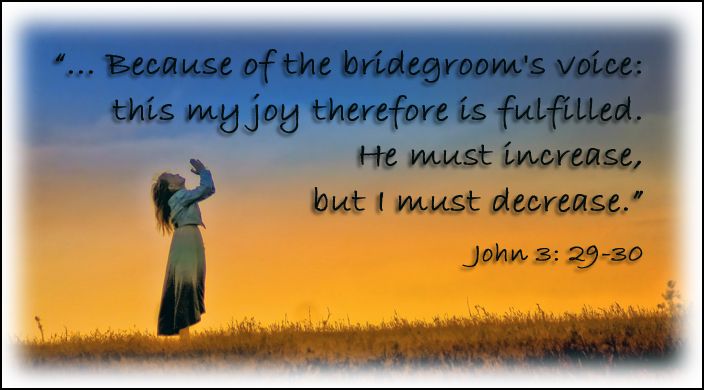 My mind goes back to the God’s words to Moses concerning the children of Israel who had been rescued from Pharaoh's tyranny.